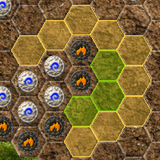 Hexxagon is a board game much like Ataxx, but with a slight difference: it is played on a hexagonal field. The goal of the game is to have the majority of the disks by the end of the game. In each round you are allowed to take one action: either you can grow into one of the adjacent fields or you can jump to one which is distanced two fields away from you. After you made your move, those neighbouring fields which have your opponent's disks are flipped over to your color.

In puzzle mode, you are faced with different boards. When you defeat one level, 3 new are unlocked for you to play on. In each chapter you can find 18 of them, and only after finishing all are you allowed to move on to the next one. If you complete a board, you get stars; these are given based on the difficulty, which you have 9 of in the puzzle mode. To gain 3 gold stars you have to finish it on the maximum difficulty; initially you only get one bronze star. In puzzle mode, you can also unlock rating boards (more about this in the Rating section). The puzzles will always grow with updates, so don't delete the game after you finished it

. In this mode, only 5 undo moves are allowed.

Much like in our Reversi game, you can play against a computer with ELO ratings from 200 to 2400. Thus you can reach the rating of 2800. Changes in rating depend on the score of the actual game and the rating of the computer opponent.
The maximum rating difference that counts is 400. This means that you will get the same rating increase against the computer whose rating is better by 400, than against a computer whose rating is better by 600. On the other hand, if your rating is 400 or better than the computer's, no rating will be calculated: you cannot get a better rating, and for practical reasons you also won't lose any, so if you wish to show the game to your friends, you can preserve your rating by setting the difficulty to low.
Based on the difference in ratings, there is an expected score for the game, which isn't shown to you during the game itself. If you get a better score than this, your rating will increase; otherwise it will decrease, or in rare cases won't change. The basic score for a game is 1 (if you win), 0.5 (if you draw) or 0 (if you lose). For each undo you use, the score will be decreased by 0.1 - this is the undo penalty. You can lower this undo penalty by achieving 10 Discs through the awards (only three undo discounts at most).
Be careful, you can easily lose rating if you use too many undo moves, even if you win!
A quick summary about rating calculations:

Zen mode contains all the levels you unlocked in puzzle mode with an extra feature, that this time you can switch sides. You thought that a certain level like Daltons and Lucky Luke would be easier with black, now you have the chance to try it out... There are also 12 free boards (that would take time for you to unlock in puzzle mode) so you can try out the 3 player mode sooner. Here every win counts, we don't give penalty, don't subtract points, the only way your score goes is up. The higher difficulty you play at, the more points you get. So go ahead and try it out, if you haven't already!

You can get awards by unlocking achievements.
For each award you get a few Discs, which helps reduce the undo penalty at the rating calculation (see Rating Mode & Rating System).
Achievements are checked only when the game was finished (neither side can move).
When the achievement's description says that you have to win then only 5 undo moves are allowed.

Retrieved from http://blindlogic.eu/index.php/Hexxagon/Help
Page last modified on August 30, 2011, at 11:50 PM